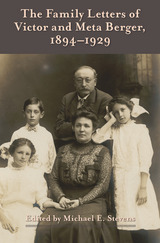 The Family Letters of Victor and Meta Berger

provide an insider's view of congressional, labor and party politics as well as a glimpse into the marriage and family life of a prominent Wisconsin couple. Victor Berger helped create a well-organized political machine in Milwaukee that engineered his election to the U.S. House of Representatives six times and controlled the mayor's office for almost 50 years. His wife, Meta, an activist in her own right, served as a member of the Milwaukee school board and of the University of Wisconsin Board of Regents, and vigorously advocated on behalf of woman suffrage and peace.

Mixing commentary on public affairs with family news and love notes, The Family Letters demonstrate how Victor and Meta were both interested observers as well as actors who sought to shape events in early twentieth century America.

earned his Ph.D. in history from the University of Wisconsin-Madison.  He served as the State Historic Preservation Officer at the Wisconsin Historical Society and is now retired.