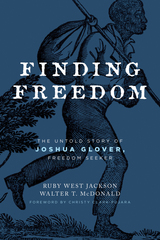 Finding Freedom: The Untold Story of Joshua Glover, Freedom Seeker
by Ruby West Jackson and Walter T McDonald
Wisconsin Historical Society Press, 2022
Paper: 978-0-87020-955-0
eISBN: 978-0-87020-995-6
First published in 2007, the groundbreaking book Finding Freedom provided the first narrative account of the life of Joshua Glover, the freedom seeker who was famously broken out of jail by thousands of Wisconsin abolitionists in 1854. This paperback edition reframes Glover’s story with a new foreword from historian Christy Clark-Pujara. Employing original research, authors Ruby West Jackson and Walter T. McDonald chronicle Glover's days as an enslaved person in St. Louis, his violent capture and escape in Milwaukee, his journey on the Underground Railroad, and his thirty-three years of freedom in rural Canada. While the catalytic “Glover incident” captured national attention—pitting the state of Wisconsin against the Supreme Court and adding fuel to the pre–Civil War fire—the primary focus is on the ordinary citizens, both Black and white, with whom Joshua Glover interacted. A bittersweet story of bravery and compassion, Finding Freedom provides the first full picture of the man for whom so many fought and around whom so much history was made.
AUTHOR BIOGRAPHY
The great-granddaughter of enslaved people, Ruby West Jackson (1929–2014) worked as a teacher and lecturer, community activist, and costumed interpreter of pioneer Black women in Wisconsin. A recipient of the National Parks Service Network to Freedom Award, she served as the African American History Coordinator for the Wisconsin Historical Society and wrote and consulted frequently on Black history and stories about slavery.

Walter T. McDonald (1927–2019) spent fifty years as a forensic psychologist. Over the course of his thirty-year collaboration with Ms. Jackson, Dr. McDonald mapped underground railroad routes into and out of Wisconsin and served as a script consultant for Rope of Sand, a play about Joshua Glover and the Fugitive Slave Act.

Christy Clark-Pujara, Associate Professor of History in the Department of Afro-American Studies at the University of Wisconsin–Madison, is a historian whose research focuses on the experiences of Black people in French and British North America through the early 1800s. Her current book project examines how the practice of race-based slavery, Black settlement, and debates over abolition and Black rights shaped race relations in territorial Wisconsin.

TABLE OF CONTENTS
Contents
Note on the Second Edition
Foreword by Christy Clark-Pujara
1. A Slave in St. Louis
2. The “Peculiar Institution”
3. Rumblings in Wisconsin
4. Flight to Freedom
5. Life in Racine
6. A Violent Capture and Thrilling Escape
7. Glover Goes by Rail
8. Trials and Tribulations
9. The Promised Land
10. Sweet and Bitter: Life on the Farm
11. A “Stabbing Affray”
12. The End of the Line
13. Aftermath
Authors’ Note on the First Edition: The Search for Joshua Glover
Notes
Index
Discussion Questions