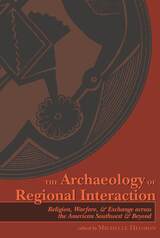 BUY
The Archaeology of Regional Interaction: Religion, Warfare, and Exchange across the American Southwest and Beyond
edited by Michelle Hegmon
University Press of Colorado, 2000
eISBN: 978-1-60732-122-4
Paper: 978-0-87081-904-9
How and why did styles, materials, conflicts, and religious ideas spread across prehistoric landscapes? The Archaeology of Regional Interaction investigates these questions, using the rich resource of the American Southwest and covering periods from the Folsom to the nineteenth century. Editor Michelle Hegmon has compiled superbly researched essays into a comprehensive examination of regional interaction that has proved itself a pivotal archaeological text.

The Archaeology of Regional Interaction surpasses most regional studies, which only focus on settlement patterns or exchange, and considers other forms of interaction, such as intermarriage and the spread of religious practices. Contributors focus especially on understanding the social processes that underlie archaeological evidence of interaction.

The essays in this volume examine what regional systems involve, in terms of political and economic relations, and how they can be identified. One essay by Steven LeBlanc provides a sweeping analysis of conflict, a form of regional interaction that has received relatively little attention in the Southwest until recently. A series of chapters devoted to expanding the coverage beyond the borders of the traditional Southwest examines the surrounding areas, including Nevada and Utah, northern Mexico, and the Plains.The volume also provides a unique treatment of religion - including manifestations such as Flower World Iconography, Medicine Societies, and ceremonial textiles - as a form of regional interrelation.
AUTHOR BIOGRAPHY
Michelle Hegmon is a professor in the School of Human Evolution and Social Change at Arizona State University.
TABLE OF CONTENTS
Contents
Illustrations
Foreword
Preface
1: Changing Perceptions of Regional Interaction in the Prehistoric Southwest
Part 1: Regional Issues and Regional Systems
2: What is a Regional System?
3: Regional Interaction and Warfare int he Late Prehistoric Southwest
4: Scale, Interaction, and Regional Analysis in late Pueblo Prehistory
5: Regional Interactions and Regional Systems in the Protohistoric Rio Grande
6: Regional Approaches with Unbounded Systems
Part 2: Interregional Economies and Exchange
7: Theorizing the Political Economy of Southwestern Exchange
8: Networks of Shell Ornament Exchange
9: Exchange, Assumptions, and Mortuary Goods in Pre-Paquine Chihuahua, Mexico
10: Pottery, Food, Hides and Women
Part 3: Beyond the Borders of the Traditional Southwest
11: Scale, Innovation and Change in the Desert West
12: Life at the Edge
13: Fremont Farmers
14: Prehistoric Movements of Northern Uto-Aztecan Peoples along the Northwestern Edge of the Southwest
15: Aggregation, Warfare, and the Spread of the Mesoamerican Tradition
Part 4: The Spread of Religious Systems
16: Katsinas and Kiva Abondonment at Homol'ovi
17: Navajo Ritual Histories, Organization, and Architecture
18: Cultural Collapse and Reorganization
19: The Flower World in Prehistoric Southwest Material Culturre
List of Contributors
Index
REQUEST ACCESSIBLE FILE