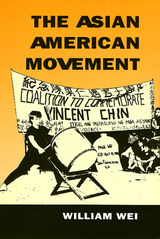 Active for more than two decades, the Asian American movement began a middle-class reform effort to achieve racial equality, social justice, and political empowerment. In this first history and in-depth analysis of the Movement, William Wei traces to the late 1960s, the genesis of an Asian American identity, culture, and activism.

Wei analyzes the Asian American women's movement, the alternative press, Asian American involvement in electoral politics. Interviews with many key participants in the Movement and photographs of Asian American demonstrations and events enliven this portrayal of the Movement's development, breadth, and conflicts.

AUTHOR BIOGRAPHY
William Wei teaches modern Chinese history and Asian American studies at the University of Colorado at Boulder. Born in Tinghai, China, and raised in New York City, Dr. Wei is also the author of Counterrevolution in China: The Nationalists in Jiangxi during the Soviet Period.
REVIEWS

"This is the first-ever study of the Asian American movement. It is a unique source and is going to have a significant audience among all those interested in the Asian American experience." —Richard Flacks, University of California, Santa Barbara