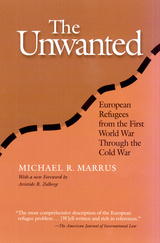 There have always been homeless people, but only in the twentieth century have refugees become an important part of international politics, seriously affecting relations between states. Since the 1880s, the number of displaced persons has climbed astronomically, with people scattered over vaster distances and for longer periods of time than ever before. Tracing the emergence of this new variety of collective alienation, The Unwanted covers everything from the late nineteenth century to the present, encompassing the Armenian refugees, the Jews, the Spanish Civil War émigrés, the Cold War refugees in flight from Soviet states, and much more. Marrus shows not only the astounding dimensions of the subject but also depicts the shocking apathy and antipathy of the international community toward the homeless. He also examines the impact of refugee movements on Great Power diplomacy and considers the evolution of agencies designed to assist refugees, noting outstanding successes and failures.
AUTHOR BIOGRAPHY
Michael R. Marrus is Chancellor Rose and Ray Wolfe Professor of Holocaust Studies and Dean of Graduate Studies at the University of Toronto. He is the author of five books, including, most recently, The Nuremberg War Crimes Trial 1945-46: A Documentary History.Aristide R. Zolberg is University-in-Exile Professor at the Graduate Faculty of the New School for Social Research in New York City and Director of the International Center for Migration, Ethnicity, and Citizenship. He is the author or editor of many books, including Escape from Violence: Conflict and the Refugee Crisis in the Developing World.
TABLE OF CONTENTS


List of MapsForeword – Aristide R. ZolbergPreface to the New EditionPrefaceIntroductionPart I: Toward a Mass Movement1. The Nineteenth Century2. The Jewish Exodus from Eastern Europe3. The Balkans and the "Unmixing of Peoples"Part II: Thenansenera4. The Great War and Upheaval in Eastern Europe5. Refugees and the Collapse of the Tsarist EmpireJewish Refugees in Eastern EuropeForcible Repatriation to the Soviet UnionUNRRA6. Refugees on the MoveGermansJews7. The IRO and the "Last Million"Epilogue Contemporary EuropeRefugees and the Origins of the Cold WarShapinga UN Agency: UNHCRCold War RefugeesDiminished Importance of EuropeSettling Old BusinessNew RefugeesNotesIndex