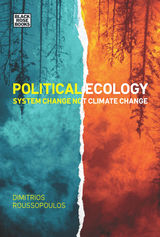 “System change not climate change!” This cry reverberated throughout the streets of Paris during 2015’s heated COP21 climate negotiations. It was as much a demand as it was an indictment of the failure of existing political institutions to respond adequately to our world’s ecological crisis. In an era of slow motion apocalypse, with 3,500 international environmental agreements to date, where did everything go wrong?

In this new and greatly expanded edition of his 1991 classic Political Ecology, Dimitri Roussopoulos delves into the history of environmentalism to explain the failure of the state management of the ecological crisis. He explores civil society’s various past responses and the prospects for channeling environmentalist aspirations into political alternatives, emphasizing the ideas of social ecology and the central role of democratic neighborhoods and cities in developing alternatives. Ecologists, Roussopoulos argues, aim further than simply protecting the environment—they call for new communities, new lifestyles, and a new way of doing politics.

This US edition also includes a new preface analyzing the implications of Trump’s presidency for climate politics and an extensive new conclusion analyzing the Paris Accord. Revised, expanded, and updated, Political Ecology is a classic that provides an essential, timely history of the environmental movement now when we need it most.
AUTHOR BIOGRAPHY
Dimitri Roussopoulos is an author, publisher, community organizer, and public speaker. In 1990, he was also the founder of North America's first municipal ecological political party.
TABLE OF CONTENTS
PREFACE 2019
PREFACE
SECTION ONE: The State Management of the Environment
SECTION TWO: Citizens’ Responses to the Plight of the Earth
SECTION THREE: Political Ecology and Social Ecology
SECTION FOUR: A Road Map Beyond Mere Environmentalism
SECTION FIVE: The New Politics of Social Ecology
EPILOGUE 1993
EPILOGUE 2015
POSTSCRIPT: After Paris COP21– What Next? System Change not Climate Change
Notes - Preface 2019
Notes
Bibliography