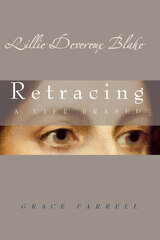 Yet for all her remarkable accomplishments, Lillie Blake's story has been all but forgotten. As Grace Farrell reveals in this richly textured biography, Blake's creative writings did not survive the canonical purges of women authors at the turn of the twentieth century, and her contributions to the suffrage movement were simply ignored in the official histories sanctioned by Susan B. Anthony. From the traces that remain, Farrell reconstructs an extraordinary life of passion and purpose. She chronicles Blake's literary career from Civil War correspondent to novelist and provides an inside view of suffrage politics, correcting some long held misconceptions perpetuated by Anthony and her supporters.

At the same time, Farrell expands the generic boundaries of biography by recounting not only a life and the causes of its erasure but also her own process of recovering that life. She brings the reader along with her as she follows Blake's path in the world, touches her diary, reads her letters, and campaigns to prevent Yale University from demolishing Blake's childhood home in New Haven.
AUTHOR BIOGRAPHY
Grace Farrell is the Rebecca Clifton Reade Professor of English at Butler University. Among her published works is an edition of Lillie Devereux Blake's 1874 novel, Fettered for Life.