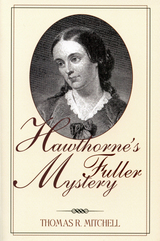 Drawing on recently published letters and journals, Thomas R. Mitchell describes how Julian Hawthorne's misrepresentation of his father's relationship with Fuller destroyed her literary reputation, promoted Hawthorne as a defender of conservative values, and continues to obscure the depth of Hawthorne's personal and intellectual involvement with her. Mitchell concludes that far from being repulsed by Fuller and her assertiveness--as many scholars have claimed--Hawthorne experienced with her perhaps the most intimate relationship that he ever had with a woman, his wife alone excepted.

Blending biography, cultural history, and literary and psychological analysis, Hawthorne's Fuller Mystery raises provocative questions about the origins and intent of Hawthorne's greatest works and offers compelling new readings of "Rapaccini's Daughter," The Scarlet Letter, The Blithedale Romance, and The Marble Faun.
AUTHOR BIOGRAPHY
Thomas R. Mitchell is dean of the College of Arts and Sciences and professor of English at Texas A&M International University.