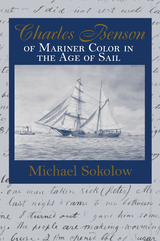 BUY
Charles Benson: Mariner of Color in the Age of Sail
by Michael Sokolow
University of Massachusetts Press
Paper: 978-1-55849-794-8
"What a miserable life a sea fareing life is," wrote steward Charles Augustus Benson (1830–1881) in his journal in 1862. As a career mariner for nearly two decades, he was well acquainted with the common privations and tribulations of life at sea. But as a black man, Benson faced even greater challenges, especially when it came to his duties, his shipboard status, and his interactions with the other men on board. In nineteenth-century America, thousands of black men served as sailors. What makes Benson distinctive is the detailed diary he kept, a fascinating narrative that documents his experiences and feelings. In this volume, Michael Sokolow uncovers the inner world of this remarkable individual. Raised in a small town in Massachusetts, Benson was the great-great-grandson of slaves, the great-grandson of a rare eighteenth-century intermarriage between a black man and a white woman, and the grandson of a veteran of the American Revolution. His own life had been marked by economic struggle, marital conflict, and the social ambiguities of mixed race heritage. In his personal writings, Benson reflected on both the man he was and the man he wanted to be. Living in a culture that prized "self-made" individuals, he sought to forge his own identity even as he labored under strictures that severely limited opportunities for blacks. From his youth in rural Middlesex County, Massachusetts, to his subsequent adult life in the bustling port city of Salem, Benson measured himself against the mores of white, middle-class America. Undeterred by early failures in both marriage and finance, he held fast to his personal vision and became a respectable husband, provider, worker, and member of the black community.
AUTHOR BIOGRAPHY
Michael Sokolow is assistant professor of history, Kingsborough Community College, CUNY.