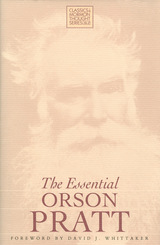 The Essential Orson Pratt
foreword by David J. Whittaker
Signature Books, 1991
eISBN: 978-1-56085-375-6
The author of several dozen seminal treatises on Mormon doctrine, Orson Pratt (1811-81) produced a library of spirited and thoughtful expositions and defenses of the LDS church that charted the course for all subsequent church theologians.

Born in Henderson, New York, Pratt was a contemporary of Joseph Smith, who, like his successor Brigham Young, often depended on Pratt’s rhetorical skills and scientific eclecticism in presenting the Mormon message to the outside world. Since Pratt was a member of the leading Quorum of Twelve Apostles, many of his works were published in pamphlet form for proselytizing purposes. His rudimentary mathematical talents were also relied on to help navigate the first party of pioneers to the Great Salt Lake Valley. He was the first Mormon to enter the valley—three days before Young.

A stubborn and fiercely independent intellectual, Pratt also clashed with Smith over polygamy and with Young over the nature of God and the origin of the soul. Their arguments eventually led Young in 1875 to demote him within the quorum, reducing his chances of succeeding to the church presidency. Pratt suffered from diabetes, and his final years were plagued by illness. He died in Utah at the age of seventy. Nevertheless, his influence has continued.

Pratt was the first to write and publish an account of Smith’s famous “first vision,” and he authored one of the earliest confessions of Mormon doctrine, which Smith later used in composing his own “Articles of Faith.” Pratt edited the Latter-day Saints’ Millennial Star, The New York Messenger, The Seer, and The Prophetic Almanac, the latter consisting of astrological observations, folk wisdom, theological essays, and one of the first LDS statements that humans could become gods.

Pratt’s most controversial speculation was that atoms, then thought to be indestructible and indivisible, were intelligent, self-conscious, sentient, self-propelled particles which bonded together to form colonies in the shape of plants, minerals, animals, humans, and gods, and which were tutored over time in the “great school of the universe.” His writing was thus a unique blend of biblical and pseudo-scientific philosophy. Twentieth-century reprints of his works have tended to overlook his more controversial ideas and emphasized the less radical ones. In the present compilation, care has been taken to remain faithful to the originals, leaving nothing out.

AUTHOR BIOGRAPHY
David J. Whittaker is a professor of history, senior librarian, and curator of western and Mormon manuscripts for the Harold B. Lee Library at Brigham Young University. He is the editor of Mormon Americana: A Guide to Sources and Collections in the United States and Tinkling Cymbals and Sounding Brass: The Art of Telling Tales about Joseph Smith and Brigham Young; co-editor of Supporting Saints: Life Stories of Nineteenth-Century Mormons; co-author of Men with a Mission: The Quorum of the Twelve Apostles in the British Isles, 1837-1841; and a contributor to Mormonism in Early Victorian Britain, Studies in Mormon History: 1830-1997, and The Essential Orson Pratt.