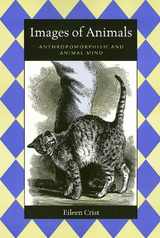 Seeing a cat rubbing against a person, Charles Darwin described her as "in an affectionate frame of mind"; for Samuel Barnett, a behavioralist, the mental realm is beyond the grasp of scientists andbehavior must be described technically, as a physical action only. What difference does this difference make? In Eileen Crist's analysis of the language used to portray animal behavior, the difference "is that in the reader's mind the very image of the cat's 'body' is transfigured...from an experiencing subject...into a vacant object."

Images of Animals examines the literature of behavioral science, revealing how works with the common aim of documenting animal lives, habits, and instincts describe "realities that are worlds apart." Whether the writer affirms the Cartesian verdict of an unbridgeable chasm between animals and humans or the Darwinian panorama of evolutionary continuity, the question of animal mind is ever present and problematic in behavioral thought. Comparing the naturalist writings of Charles Darwin, Jean Henri Fabre, and George and Elizabeth Peckham to works of classical ethology by Konrad Lorenz and Nikolaas Tinbergen and of contemporary sociobiology, Crist demonstrates how words matter. She does not attempt to defend any of these constructions as a faithful representation of animal existence, but to show how each internally coherent view molds the reader's understanding of animals. Rejecting the notion that "a neutral language exists, or can be constructed, which yields incontestably objective accounts of animal behavior," Crist argues that "language is not instrumental in the depiction of animals and, in particular, it is never impartial with respect to the question of animal mind."
AUTHOR BIOGRAPHY
Eileen Crist is Assistant Professor at the Center for Interdisciplinary Studies at Virginia Polytechnic Institute.
TABLE OF CONTENTS

Introduction: The Significance of Language in Portraying Animals

3. The Ethological Constitution of Animals as Natural Objects

4. Genes and Their Animals: The Language of Sociobiology

6. Unraveling the Distinction Between Action and Behavior