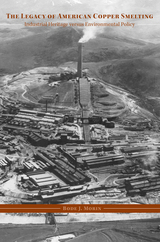 Throughout world history, copper has been a significant metal for a vast number of cultures, from the oldest civilizations on record to the Bronze Age and Greek and Roman antiquity. Though replaced by iron as the primary metal for tools and weapons in ancient civilizations, copper found new resurgence in the nineteenth century when it was discovered to have particularly high thermal and electrical conductivity. Copper mining quickly escalated into a large-scale industry, and because of its vast reserves and innovative mining techniques, the United States seized the reins of global production with the opening of significant copper mines in Tennessee and Michigan in the 1840s and Montana in the 1870s.
Copper-mining prosperity and America’s dominance of the industry came with a heavy environmental price, however. As rich copper deposits declined with increased mining efforts, large deposits of leaner ores—oftentimes less than one percent pure—had to be mined to keep pace with America’s technological thirst for copper. Processing such ore left an inordinate amount of industrial waste, such as tailings and slag deposits from the refining process and toxic materials from the ores themselves, and copper mining regions around the United States began to see firsthand the landscape degradation wrought by the industry.
In The Legacy of American Copper Smelting, Bode J. Morin examines America’s three premier copper sites: Michigan’s Keweenaw Peninsula, Tennessee’s Copper Basin, and Butte- Anaconda, Montana. Morin focuses on what the copper industry meant to the townspeople working in and around these three major sites while also exploring the smelters’ environmental effects. Each site dealt with pollution management differently, and each site had to balance an EPA-mandated cleanup effort alongside the preservation of a once-proud industry.
Morin’s work sheds new light on the EPA’s efforts to utilize Superfund dollars and/or protocols to erase the environmental consequences of copper-smelting while locals and preservationists tried to keep memories of the copper industry alive in what were dying or declining post-industrial towns. This book will appeal to anyone interested in the American history of copper or heritage preservation studies, as well as historians of modern America, industrial technology, and the environment.