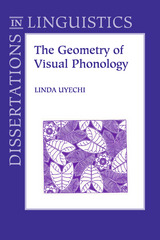 Uyechi presents an extremely thorough and formal empirical description of the various features of ASL signs, of interest to any theoretician in developing a theory of sign phonology or in testing claims in the theory of the phonology of spoken languages against data from a signed language. The author also presents a formalism for representing signs and makes a number of theoretical proposals based on this formalism. The volume's analysis indicates that the properties of core constructs of the spoken-language phonology, namely the segment and the syllable, differ from the properties of the core constructs in a formal framework of visual phonology. The Geometry of Visual Phonology also differs from other analyses in concluding that such differences are not immediately reconcilable. This volume provides a framework for discussing crucial differences between signs and speech.
TABLE OF CONTENTS