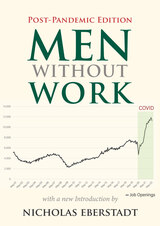 Nicholas Eberstadt’s landmark 2016 study, Men Without Work, cast a spotlight on the collapse of work for men in modern America. Rosy reports of low unemployment rates and “full or near full employment” conditions, he contends, were overlooking a quiet, continuing crisis: Depression-era work rates for American men of “prime working age” (25–54).
The grim truth: over six million prime-age men were neither working nor looking for work. Conventional unemployment measures ignored these labor force dropouts, but their ranks had been rising relentlessly for half a century. Eberstadt’s unflinching analysis was, in the words of The New York Times, “an unsettling portrait not just of male unemployment, but also of lives deeply alienated from civil society.”
The famed American work ethic was once near universal: men of sound mind and body took pride in contributing to their communities and families. No longer, warned Eberstadt. And now—six years and one catastrophic pandemic later—the problem has not only worsened: it has seemingly been spreading among prime-age women and workers over fifty-five.
In a brand new introduction, Eberstadt explains how the government’s response to Covid-19 inadvertently exacerbated the flight from work in America. From indiscriminate pandemic shutdowns to almost unconditional “unemployment” benefits, Americans were essentially paid not to work.
Thus today, despite the vaccine rollouts, inexplicable numbers of working age men and women are sitting on the sidelines while over 11 million jobs go unfilled. Current low rates of unemployment, touted by pundits and politicians, are grievously misleading. The truth is that fewer prime-age American men are looking for readily available work than at any previous juncture in our history. And others may be catching the “Men Without Work” virus too.
Given the devastating economic impact of the Covid calamity and the unforeseen aftershocks yet to come, this reissue of Eberstadt’s groundbreaking work is timelier than ever.
AUTHOR BIOGRAPHY

Nicholas Eberstadt holds the Henry Wendt Chair in Political Economy at the American Enterprise Institute (AEI), where he researches and writes extensively on demographics, economic development generally, and more specifically, international security, particularly in the Korean peninsula and Asia. He also focuses on poverty and social well-being within the United States. Domestically, he focuses on poverty and social well-being.

Mr. Eberstadt is a senior adviser for the National Bureau of Asian Research (NBR). He has served as a consultant or adviser for various units within the US government and frequently delivers expert testimony on a wide range of topics before Congress. In addition to his other achievements, he was awarded the prestigious Bradley Prize in 2012 and gave the Irving Kristol Lecture in 2020. Mr. Eberstadt earned his PhD, MPA, and AB from Harvard University and an MSc from the London School of Economics. He and his wife, Mary Eberstadt, have four children.

Like Men Without Work, his previous book, Nation of Takers: America's Entitlement Epidemic (Templeton Press, 2012), was a best seller.

"[A] searing indictment of contemporary America. It convinces me that economics cannot explain why 1 in 7 prime age men 25 to 54 are not working today amidst a massive labor shortage."

“Nick Eberstadt is a political economist and Harvard grad with lots of accolades and many academic accomplishments. I won’t list them all, but suffice it to say he’s the real deal. Nick has also written a number of excellent books, one of which I was delighted to learn confirms my long-held views about America’s flight from work. The book is called Men Without Work, and it was first published in 2016, when Nick first began to see a shocking number of healthy men in their prime working years, exit the workforce. He’s just released an updated version of his book, and for good reason. Since the lockdown, the underlying problem has been exacerbated exponentially….Nick has the courage to spell it all out.”

Mike Rowe, The Way I Heard It

"As Nicholas Eberstadt of the American Enterprise Institute, the author of Men Without Work, has powerfully pointed out, we are suffering from an ongoing decline in the workforce participation rate of working-age men. There are, he reports, some four times as many prime working-age men (25 to 34) who have simply dropped out of the workforce as there are those formally unemployed and looking for work."

"Nicholas Eberstadt is one of America’s most brilliant political economists."

"[A] timely warning to both sides of the aisle as to the challenges social policy still faces."

"I really highly recommend this book."

"Nicholas Eberstadt has written a compelling book about what has happened to millions of men in America as a result of our cultural moment.

"[Eberstadt] demonstrates that a trend that began in the 90s was accelerated by the pandemic, when government programs incentivized many men to go into a form of 'premature retirement' and drop out of the workforce."

"[Eberstadt] has done significant research on the phenomenon of 'men without work.' A new edition of that pioneering study just came out to account for the impact of COVID-19....The most disturbing aspect of Eberstadt’s research is not men who want but can’t find work. They’re as real and common as unicorns. It’s men who could but aren’t looking for work, men who have bowed out of the workforce."

"I think it's fantastic. It's a quick read and it's a powerful read."

Brian Buffini, It's A Good Life