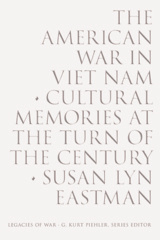 After more than four decades, the Viet Nam War continues to haunt our national memory, culture, politics, and military actions. In this probing interdisciplinary study, Susan Lyn Eastman examines a range of cultural productions—from memorials and poetry to cinematic and fictional narratives—that have tried to grapple with the psychic afterlife of traumatic violence resulting from the ill-fated conflict in Southeast Asia.

Underpinning the book is the notion of “prosthetic memory,” which involves memories acquired by those with no direct experience of the war, such as readers and filmgoers. Prosthetic memories, Eastman argues, refuse to relegate the war to the forgotten past and challenge the authenticity of experience, thus ensuring its continued relevance to debates over America’s self-conception, specifically her coinage of the “New Vietnam Syndrome,” and the country’s role in world affairs when it comes to contemporary military interventions.

With the notable exception of the Veterans’ Memorial in Washington, Eastman’s focus is on works produced from the Persian Gulf War (1990–91) through the post-9/11 “War on Terror.” She looks not only at American representations of the war—from movies like Randall Wallace’s We Were Soldiers to poems by W. D. Ehrhart, Yusef Komunyakaa, and others—but also at novels by Vietnamese authors Bao Ninh and Huong Thu Duong. The experiences of women figure prominently in the book: Eastman devotes a chapter to the Vietnam Women’s Memorial and another to Sandie Frazier’s novel I Married Vietnam and Oliver Stone’s film Heaven and Earth, based on memoirs by Le Ly Hayslip. And by examining Jessica Hagedorn’s Dream Jungle, a novel inspired by the filming of Apocalypse Now, she considers how the war’s repercussions were felt in other countries, in this case the Philippines. Her investigation of Vietnamese American authors Lan Cao, Andrew Lam, and GB Tran adds a transnational dimension to the study.

With its up-to-date perspective on recent works that have heretofore received scant critical notice, this book offers new ways of thinking about one of the most polemic chapters in U.S. history.

SUSAN LYN EASTMAN teaches in the Department of English at the University of Tennessee at Chattanooga.