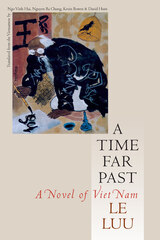 A Time Far Past: A Novel of Viet Nam
by Le Luu
translated by Ngo Vinh Hai, Nguyen Ba Chung, Kevin Bowen and David Hunt
University of Massachusetts Press, 2017
Paper: 978-1-62534-290-4
This epic novel presents a sweeping portrait of war and peace in northern Vietnam from the defeat of the French to the mid-1980s. The story follows the odyssey of Giang Minh Sai, the son of a Confucian scholar in the rural Red River delta, from his early childhood through his decorated service during the American War and his later efforts to adapt to the postwar world of urban Ha Noi. Through two failed marriages, Giang Minh Sai struggles to come to terms with his responsibilities, his past, and his future. The novel's ending leaves its hero and Vietnamese socialism at a problematic and painful crossroads.

In its intricate sketching of complicated alliances, personal debts, and human interactions, A Time Far Past explores the complex layering of family and village history and Party and feudal authority. It also paints a vivid picture of the vast dislocations in Vietnamese culture caused by the political and military turmoil of the Indochina wars.

A Time Far Past was enormously popular in Vietnam, where it was first published in 1986, selling more than 120,000 copies and winning that country's national prize for fiction.
AUTHOR BIOGRAPHY
Born in Hai Hung Province, Le Luu was an army courier on the Ho Chi Minh trail and a combat correspondent during the American War. He is an editor for the literary magazine Van Nghe Quan Doi. Writer-translator Ngo Vinh Hai and poet--literary scholar Nguyen Ba Chung are both natives of Viet Nam and now live near Boston. Kevin Bowen is adjunct professor of English and director of the William Joiner Center and David Hunt is professor of history, both at the University of Massachusetts Boston.