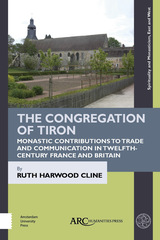 BUY
The Congregation of Tiron: Monastic Contributions to Trade and Communication in Twelfth-Century France and Britain
by Ruth Harwood Cline
Arc Humanities Press, 2019
eISBN: 978-1-64189-359-6
Cloth: 978-1-64189-358-9
Tiron was a reformed Benedictine congregation founded ca. 1109 by Bernard of Abbeville. Though little known to medieval and religious historians, this in-depth study shows how it expanded from obscurity in the forests of the Perche to become an international congregation with headquarters in Chartres and Paris and abbeys and priories in France and the British Isles. The congregation become noted for building, crafts, education, and horse-breeding. Tiron preceded the Cistercians in Britain and traded in rising towns, and by 1147 it had a centrally-controlled network of riverine and coastal properties connecting its production hubs with towns and ports.
TABLE OF CONTENTS