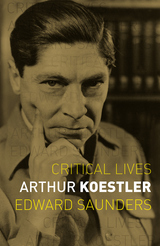 Born in Budapest in 1905, Arthur Koestler was a pivotal European writer and intellectual who inspired, provoked, and intrigued in equal measure. Koestler wrote enduring works of reportage and memoir, but he is most famous for his political novel Darkness at Noon, which received widespread international acclaim. In Arthur Koestler, Edward Saunders offers a fresh and clear-eyed account of the life and work of an enigmatic, challenging writer who continues to polarize opinion today.

Saunders sketches Koestler as a leading documentarian of some of the key moments in twentieth-century European history, showing the remarkable ways that he was able to stage himself as a witness to them. Saunders explores Koestler’s struggle with his Jewish identity, outlines his ideas on the theory of science and the ways he tried to imagine the future of science and humankind, and directly engages with the controversial claims of sexual violence that have emerged in the years following Koestler’s suicide. Differentiating the life Koestler led from the story he wanted to tell about it and various ways the public has influenced his reputation after his death, this book offers a balanced portrait of a vibrant figure in twentieth-century arts and letters.
AUTHOR BIOGRAPHY
Edward Saunders is a researcher at the Ludwig Boltzmann Institute for the History and Theory of Biography in Vienna, Austria.
TABLE OF CONTENTS


Abbreviations
Introduction: Why Koestler?
1 From Budapest to Palestine
2 Zionist and Communist
3 Documentarist
4 Infamy and Autobiography
5 Science and Progress
6 Uncertain Evolution
7 A Reputation Ruined?