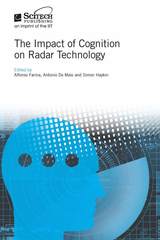 Cognitive dynamic systems are inspired by the computational capability of the brain and the viewpoint that cognition is a supreme form of computation. The key idea behind this new paradigm is to mimic the human brain as well as that of other mammals with echolocation capabilities which continuously learn and react to stimulations according to four basic processes: perception-action cycle, memory, attention, and intelligence.

The Impact of Cognition on Radar Technology is an essential exploration of the application of cognitive concepts in the development of modern phased array radar systems for surveillance. It starts by asking whether our current radar systems already have cognitive capabilities and then discusses topics including: mimicking the visual brain; applications to CFAR detection and receiver adaptation; cognitive radar waveform design for spectral compatibility; cognitive optimization of the transmitter-receiver pair; theory and application of cognitive control; cognition in radar target tracking; anticipative target tracking; cognition in MIMO radar, electronic warfare, and synthetic aperture radar. The book concludes with a cross-disciplinary review of cognition studies with potential lessons for radar systems.