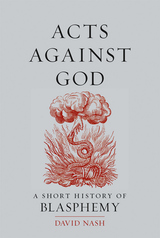 Blasphemy is a phenomenon that spans human experience, from the ancient world right up to today’s ferocious religious debates. Acts Against God is the first accessible history of this crime—its prosecution, its impact, and its punishment and suppression. While acknowledging blasphemy as an act of individuals, Acts Against God also considers the act as a widespread and constant presence in cultural, political, and religious life.

Beginning in ancient Greece and the genesis of blasphemy’s link with the state, David Nash moves on to explore blasphemy in the medieval world, where it was used both as an accusation against outsiders and as a method of crusading for piety in the West. He considers how the medieval world developed the concept of heresy as a component of disciplining its populations, the first coherent phase in state control of belief. This phenomenon reached its full flowering in the Reformation, where conformity became a fixation of confessional states. The Enlightenment created agendas of individual rights where room for religious doubt pushed blasphemy into the twilight as modern humankind hoped for its demise. But, concluding in the twenty-first century, Nash shows how individuals and the state alike now seek to adopt blasphemy as a cornerstone of identity and as the means to resist the secularization and globalization of culture.
AUTHOR BIOGRAPHY
David Nash is professor of history at Oxford Brookes University. He is the author of Blasphemy in Britain and Blasphemy in the Christian World.
REVIEWS
“A superb history from the preeminent expert in the field.”
— Andrew Copson, author of "Secularism: A Very Short Introduction"

“Acts Against God is the new authoritative account of blasphemy law’s long history. Its analysis of Western law over more than two millennia is brought vividly to life through the key trials and episodes of libel against God, the miracles, and the Trinity. Now, with blasphemy still a crime in so many countries, this offense sadly continues to define and limit our freedoms. [Writing] with a verve that bowls the reader along, Nash shows how democrats since Socrates have hankered for an Open Society in which freedom of religion might one day be matched by freedom from religion.”
— Callum Brown, Professor of Late Modern European History, University of Glasgow