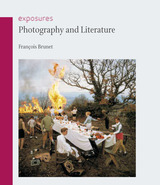 Aspiring writers are often admonished to “show, not tell,” an instruction that immediately speaks to the relationship between the written word and the visual world. It is a tenuous correspondence—both literature and art are striving toward the same goal of depiction, but the reality they portray is shaped by their chosen tools. As François Brunet argues in Photography and Literature, the advent of photography posed one of the greatest challenges to writers—here was an artistic medium that could almost instantly distill a scene or perspective. As Brunet shows, the result of this challenge has been a fantastic interplay between the two and between photographers and writers themselves.

Essential for anyone interested in the intersection of the verbal and the visual, Photography and Literature provides a fascinating wealth of autobiography, manifesto, and fiction as well as a variety of images from the first daguerreotypes to the digital age.

François Brunet is a professor of American art and literature at the University of Paris Diderot. He is the author of La naissance de l’idée de photographie and co-editor of Images of the West: Survey Photographs in French Collections, 1860–1880.

"Brunet's beautifully illustrated study shows how, starting with the British pioneer William Fox Talbot, photography has shed this aura of objectivity to become a medium of individual expression. Today, photography is the "new muse of literature" and it subverts the very reality its images were once thought to reflect with such veracity."–Guardian

"It is the scope and enthusiasm with which Photography and Literature connects the literary impulse with photography's vision of the world that makes this book a welcome addition."

"As Brunet skillfully negotiates more than 150 years of photographic history, he offers a coherent argument for the emergence of photography as a kind of writing, with possibilities for narrative and fiction that exceed its promise to capture the world as it is."