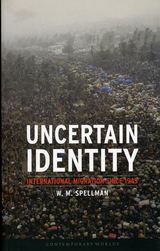 BUY FROM
Uncertain Identity: International Migration since 1945
by W. M. Spellman
Reaktion Books, 2008
eISBN: 978-1-86189-462-5
Paper: 978-1-86189-364-2
Globalization is the defining phenomenon of the twenty-first century and migration is the cornerstone of its economic and social force. Uncertain Identity examines international movements of peoples over the past sixty years to show what migration patterns have meant to the economic and social systems of countries around the world.
W. M. Spellman chronicles how after 1945, migration patterns expanded in numbers of people and origin countries, due to overpopulation, poverty, violent conflicts, and the lowered costs of air travel. Uncertain Identity sets these patterns in the context of issues such as the impact of voluntary and forced relocation on the migrants and destination countries, the significance of south-to-north migrations, and recent enactments of restrictive immigration measures in developed nations. Spellman also considers temporary and refugee migrations and the ways in which refugees maintain cultural traditions despite their new environments.
An incisive study with global breadth, Uncertain Identity offers invaluable analysis for specialists in political science, sociology, and economics.
AUTHOR BIOGRAPHY
W. M. Spellman is the Dean of Humanities at the University of North Carolina at Asheville. He is the author of Monarchies 1000–2000 and The Global Community: Migration and the Making of the Modern World, 1500–2000.
TABLE OF CONTENTS