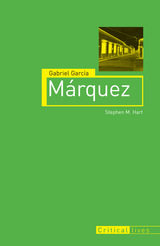 “Many years later, as he faced the firing squad, Colonel Aureliano Buendía was to remember that distant afternoon when his father took him to discover ice.” Thus begins Nobel Prize winner Gabriel García Márquez’s One Hundred Years of Solitude, one of the twentieth century’s most lauded works of fiction. In Gabriel García Márquez, literary scholar Stephen M. Hart provides a succinct yet thorough look into García Márquez’s life and the political struggles of Latin America that have influenced his work, from Love in the Time of Cholera to Memories of My Melancholy Whores.

By interviewing García Márquez’s family in Cuba, Hart was able to gain a unique perspective on his use of “creative false memory,” providing new insight into the magical realism that dominates García Márquez’s oeuvre. Using these interviews and his original research, Hart defines five ingredients that are critical to García Márquez’s work: magical realism, a shortened and broken portrayal of time, punchy one-liners, dark and absurd humor, and political allegory. These elements, as described by Hart, illuminate the extraordinary allure of García Márquez’s work and provide fascinating insight into his approach to writing. Hart also explores the divisions between García Márquez’s everyday life and his life as a writer, and the connection in his work between family history and national history.

Gabriel García Márquez presents an original portrait of this well-renowned writer and is a must-read for fans of his work as well as those interested in magical realism, Latin American fiction, and modern literature.

Stephen M. Hart is professor of Hispanic studies at University College London. He is also the author of Companion to Latin American Literature.