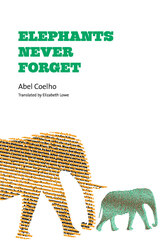 BUY
Elephants Never Forget
by Abel Coelho
translated by Elizabeth Lowe
Tagus Press, 2017
Paper: 978-1-933227-80-1
Twenty-five years after Mozambique's revolution for independence, Abel Coelho returns to his country from his home in Lisbon to revisit the places where he spent his childhood. The war was over, the one-party regime had ceded to a multi-party system, and the country was at peace. The result was this novel, which offers a little known side of post-colonial Mozambique and the civil war between the Frelimo regime and the Renamo resistance. The regime, international interests, Mozambican citizens, and resistance fighters are the protagonists in this historical drama about a contested country. The novel tells the stories of the people who were subject to the worst violence and humiliation in Mozambique's re-education camps. It is a tale of survival by men and women who fought for a better country. The main character is Rosa Temba, who owns a vegetable stand in the Maputo market and who is arrested by the secret police. She is sent to the horrors of a re-education camp, where she and her fellow inmates are determined to survive against all odds. Elephants Never Forget celebrates the resilience of the human spirit.
AUTHOR BIOGRAPHY
ABEL COELHO was born in 1953 in the city of Inhambane, Mozambique. He is an airline pilot and author of the children's book Viriato: O Chefe do Clã and the novel Filhos da pátria que os pariu, which tells the story of two children as they struggle to survive Mozambique's civil war. ELIZABETH LOWE is the founding director of the Center for Translation Studies at the University of Illinois at Urbana-Champaign. She has translated both Brazilian and Lusophone writers, including Clarice Lispector, Euclides da Cunha, Machado de Assis, Paula Parisot, Antônio Lobo Antunes, and João de Melo. Her translation of J.P. Cuenca's The Only Happy Ending for a Love Story is an Accident (Tagus Press 2013) was on the long list for the 2015 IMPAC award. She is professor of Translation Studies at the New York University School of Professional Studies.