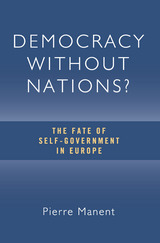 Can Europe survive after abandoning the national loyalties—and religious traditions—that provided meaning? And what will happen to the United States as it goes down a similar path?

The eminent French political philosopher Pierre Manent addresses these questions in his brilliant meditation on Europe’s experiment in maximizing individual and social rights. By seeking to escape from the “national form,” he shows, the European Union has weakened the very institutions that made possible liberty and self-government in the first place. Worse still, the “spiritual vacuity” that characterizes today’s secular Europe—and, increasingly, the United States—is ultimately untenable.

Pierre Manent teaches political philosophy in the Centre de recherches politiques Raymond Aron in Paris. His previous works in English include the groundbreaking Tocqueville and the Nature of Democracy, The City of Man, and An Intellectual History of Liberalism.