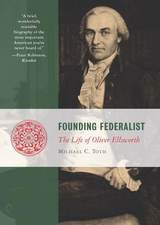 In Founding Federalist, Michael C. Toth provides an in-depth look at the life and work of Oliver Ellsworth, a largely forgotten but eminently important Founding Father.

The American Founding was the work of visionaries and revolutionaries. But amid the celebrated luminaries, the historic transformations, the heroic acts, and unforgettable discourses were practical politicians, the consensus builders who made the system work. Oliver Ellsworth—Framer, senator, chief justice, diplomat—was such a leader.

Founding Federalist brings to life a figure whose contributions shape American political life even today. Vividly capturing the pivotal debates at Philadelphia in the summer of 1787, Toth shows how Ellsworth was a vital force in shaping the Constitution as a Federalist document, one that did not extinguish the role of the states even as it recognized the need for national institutions. The author illuminates what Ellsworth and other Founders understood to be the meaning of the new constitutional order—a topic highly relevant to twenty-first-century debates about the role of government. Toth, an attorney, also brilliantly analyzes Ellsworth’s most important legislative achievement: the creation of the U.S. federal court system.

With this insightful new biography, Michael Toth has reclaimed a figure who made crucial contributions to a lasting creation: a federal republic.

AUTHOR BIOGRAPHY
Michael C. Tothis an attorney who has served in the United States Marine Corps, the White House, and the Office of the Attorney General of Texas. He holds degrees from Stanford University and the University of Virginia.
TABLE OF CONTENTS
Contents
Preface
1. The Education of a Puritan Politician
2. Revolutionary Lessons
3. The Electoral Federalist
4. “Landholder”
5. Court-Maker
6. Cases and Controversies
Afterword
Notes
Acknowledgments
Index