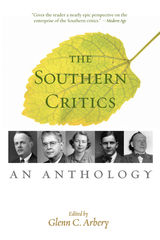 The literary greatness of the South

In the early 1920s a collection of young Southerners at Vanderbilt University formed the literary group known as the Fugitives. Over the next few decades they and their followers would exert an enormous influence on the study of literature. Indeed, the “Southern Critics” included some of the most important American writers and critics of the twentieth century: Robert Penn Warren, Flannery O’Connor, John Crowe Ransom, Allen Tate, and Cleanth Brooks, to name just a few.

In The Southern Critics: An Anthology, editor Glenn C. Arbery gathers the most penetrating essays by these and other writers, bringing their significant contribution back into focus. Arbery’s enlightening commentary allows us to understand how the Southern Critics’ concern for the history and culture of the South informed all their work—not just the landmark Agrarian manifesto I’ll Take My Stand (1930) but even their writings on literature and poetry, including their revolutionary “New Criticism.”

Remarkably, the essays collected here speak to our time as much as to the Southern Critics’ own. In the twenty-first century we recognize the prescience of their warnings about would happen to art, leisure, and time itself when everything fell under the sway of the industrial model

Glenn C. Arbery is the author of Why Literature Matters and a critic whose essays have appeared in a number of collections. He has taught literature at a number of different institutions and is now the d’Alzon Visiting Professor at Assumption College in Massachusetts.