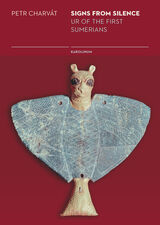 The Royal Tombs of Ur, dating from approximately 3000–2700 BCE, are among the most famous and impressive archeological discoveries of the twentieth century. Excavated between 1922 and 1934 under the direction of Leonard Woolley, this site is one of the richest sources of information we have about ancient Sumer—however, many mysteries about the society that produced these tombs remain. Based on primary research with the Ur materials at the University of Pennsylvania Museum of Archeology and Anthropology, and paying particular attention to the iconography found in what Woolley referred to as the “Seal Impression Strata of Ur,” this book works to reconstruct the early history of Sumer. What was this society like? What social structures did this society build? What were its institutions of authority? The answers Petr Charvát proposes are of interest not only to archeologists, but to anyone fascinated by early human history.
AUTHOR BIOGRAPHY
Petr Charvát teaches at Charles University Prague and University of West Bohemia in Plzen, and is the author of The Iconography of Pristine Statehood and The Birth of the State, both also published by Karolinum Press.
TABLE OF CONTENTS


Foreword
I. Archaeology: light out of the shadows of past ages?
Woolley’s Pit F and the SIS
Woolley’s Jamdat Nasr Cemetery (JNC) and the SIS
So what?

II. Inscribed seals from archaic Ur

III. The city of Ur at the beginning of the third millennium: images and signs, words and notions in seals
ARCHAICA
AMOR
Banquet scenes
Dance scenes
Birthing scenes
Coitus scenes
AMOR: Emblems
LABOR
Herding
Combat
Humans at work
HONOR
Honour to gods
Honour to communities
Honour to princes
DOLOR
Waters of death?
HIC SUNT LEONES
Voices and images of the past: Signs of proto-cuneiform writing within seal iconography of archaic Ur
UR
DIN
KAK
As time goes by: archaic Ur seal imagery within the development of Sumerian glyptic, c. 3500-2200 B.C.
The ancestral experience: Late Uruk- Jemdet Nasr glyptic
The inheritors of archaic Ur: later third-millenium Sumerian glyptic