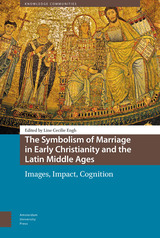 BUY
The Symbolism of Marriage in Early Christianity and the Latin Middle Ages: Images, Impact, Cognition
by Line Cecilie Engh
Amsterdam University Press, 2019
eISBN: 978-90-485-3715-0
In the Middle Ages everyone, it seems, entered into some form of marriage. Nuns -- and even some monks -- married the bridegroom Christ. Bishops married their sees. The popes, as vicars of Christ, married the universal Church. And lay people, high and low, married each other. What united these marriages was their common reference to the union of Christ and Church. Christ™'s marriage to the Church was the paradigmatic symbol in which all the other forms of union participated, in superior or inferior ways. This book grapples with questions of the impact of marriage symbolism on both ideas and practice in the early Christian and medieval period. In what ways did marriage symbolism -- with its embedded concepts of gender, reproduction, household, and hierarchy -- shape people™'s thought about other things, such as celibacy, ecclesial and political relations, and devotional relations? How did symbolic cognition shape marriage itself? And how, if at all, were these two directions of thinking symbolically about marriage related?
AUTHOR BIOGRAPHY
[Line Cecilie Engh](https://www.hf.uio.no/ifikk/english/people/aca/history-of-ideas/tenured/lineceng/) is Associate Professor of History of Ideas at the University of Oslo. She was a fellow at The Norwegian Institute in Rome from 2008 to 2017. She is the author of *Gendered Identities in Bernard of Clairvaux’s ‘Sermons on the Song of Songs’: Performing the Bride* (2014) and numerous book chapters and articles on monastic and papal writing that focus on rhetoric, hermeneutics, metaphor, gender, and cognition.
TABLE OF CONTENTS


1 Introduction: A Case Study of Symbolic Cognition Line Cecilie Engh and Mark Turner2 Conjugal and Nuptial Symbolism in Medieval Christian Thought Philip L. Reynolds3 Marriage Symbolism and Social Reality in the New Testament: Husbands, Wives, Christ and the Church Anna Rebecca Solevåg4 Single Marriage and Priestly Identity: A Symbol and Its Functions in Ancient Christianity David G. Hunter5 'Put on the dress of a wife, so that you might preserve your virginity': Virgins, Brides, and Dress in Late Antiquity Karl Shuve6 Veiled Threats: Constraining Religious Women in the Carolingian Empire Abigail Firey7 Double Standards? Medieval Marriage Symbolism and Christian Views on the Muslim ParadiseAlessandro Scafi8 Marriage, Maternity and the Formation of a Sacramental Imagination: Stories for Cistercian Monks and Nuns around the Year 1200 Martha G. Newman9 Marriage Symbolism in Illuminated Medieval Manuscripts: Visualization and Interpretation Marta Pavón Ramírez10 'His left arm is under my head and his right arm shall embrace me': The Bride and the Bridegroom in Trastevere Lasse Hodne11 Marriage in The Divine Office: Nuptial Metaphors in the Medieval Conception of the officiumSebastián Salvadó12 What Kind of Marriage Did Pope Innocent III Really Enter into? Marriage Symbolism and Papal Authority Line Cecilie Engh13 'Please don't mind if I got this wrong': Christ's Spiritual Marriage and the Law of the Late Medieval Western Church Wolfgang MüllerIndex