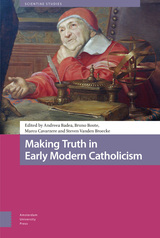 Making Truth in Early Modern Catholicism
edited by Andreea Badea, Bruno Boute, Marco Cavarzere and Steven Vanden Broecke
Amsterdam University Press, 2021
eISBN: 978-90-485-5004-3
Scholarship has come to value the uncertainties haunting early modern knowledge cultures; indeed, the awareness of the fragility and plurality of knowledge is now offered as a key element of "Baroque Science". Yet early modern actors never questioned the possibility of certainty itself; including the notion that truth is out there, universal, and therefore situated at one remove from human manipulations. This book addresses the central question of how early modern actors managed not to succumb to postmodern relativism, amidst uncertainties and blatant disagreements about the nature of God, Man, and the Universe. An international and interdisciplinary team of experts in fields ranging from Astronomy to Business Administration to Theology investigate a number of practices that are central to maintaining and functionalizing the notion of absolute truth, the certainty that could be achieved about it, and of the credibility of a wide plethora of actors in differentiating fields of knowledge.
AUTHOR BIOGRAPHY
Andreea Badea is a researcher at the chair for early modern history of the Goethe-University of Frankfurt am Main. She published on the history of knowledge, historiography, censorship and Catholicism. Her latest publications include the co-edited volume Catholic Missionaries in Early Modern Asia. Patterns of Localization (2019).

Marco Cavarzere is a researcher at the chair for early modern history of the Goethe-University of Frankfurt am Main. One if his latest publications is Historical Culture and Political Reform in the Italian Enlightenment (2020).


Bruno Boute, Andreea Badea, Marco Cavarzere, and Steven Vanden Broecke: A Product's Glamour: Credibility, or the Manufacture and Administration of Truth in Early Modern Catholicism
PART I. ACCOMMODATING
1. Rudolf Schuessler: Scholastic Approaches to Reasonable Disagreement
2. Marco Cavarzere: Regulating the Credibility of Non-Christians. Oaths on False Gods and Seventeenth-Century Casuistry
3. Steven Vanden Broecke: How to be a Catholic Copernican in the Southern Netherlands
4. Brendan Röder: Appearance and Essence. Speaking the Truth about the Body in the Early Modern Catholic Church
PART II. PERFORMING
5. Bruno Boute: Saving Truth. Roman Censorship and Catholic Pluralization in the Confessionals of the Habsburg Netherlands, 1682-1686
6. Birgit Emich: The Production of Truth in the Manufacture of Saints: Procedures, Credibility, and Patronage in Early Modern Processes of Canonization
7. Andreea Badea: Credibility of the Past. Writing and Censoring History within Seventeenth-Century Catholicism
8. Leen Spruit: Heresy and Error in the Assessment of Modern Philosophical Psychology
9. Maria Pia Donato: Modern Philosophy and Ancient Heresies: New Wine in Old Bottles?
PART III. EMBEDDING
10. Vittoria Fiorelli: Experiences are not a Successful Accompaniment toward the Knowledge of the Truth.' The Trial of the Atheists in Late Seventeenth-Century Naples
11. Cecilia Cristellon: Choosing Information, Selecting Truth. The Roman Congregations, the Benedictine Declaration, and the Establishment of Religious Pluralism
12. Rivka Feldhay: Disciplining the Sciences in Conflict Zones. Pre-Classical Mechanics between the Sovereign State and the Reformed Catholic Religion
Index