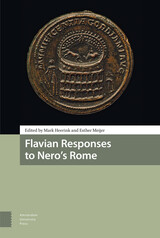 Flavian Responses to Nero's Rome
edited by Mark Heerink and Esther Meijer
Amsterdam University Press, 2022
eISBN: 978-90-485-5357-0
In this interdisciplinary volume, a team of classicists, historians, and archaeologists examines how the memory of the infamous emperor Nero was negotiated in different contexts and by different people during the ensuing Flavian age of imperial Rome. The contributions show different Flavian responses to Nero’s complicated legacy: while some aspects of his memory were reinforced, others were erased. Emphasizing the constant and diverse nature of this negotiation, this book proposes a nuanced interpretation of both the Flavian age itself and its relation to Nero’s Rome. By combining the study of these strategies with architectural approaches, archaeology, and memory studies, this volume offers a multifaceted picture of Roman civilization at a crucial turning point, and as such will have something to offer anyone interested in classics, (ancient) history, and archaeology.
AUTHOR BIOGRAPHY
Mark Heerink is Associate Professor of Latin literature at the University of Amsterdam. He is the author of Echoing Hylas: A Study in Hellenistic and Roman Metapoetics (University of Wisconsin Press, 2015) and co-editor of Brill’s Companion to Valerius Flaccus (Brill, 2014). He is currently revising J.H. Mozley’s 1934 edition and translation of Valerius Flaccus’ Argonautica for the Loeb Classical Library.

Esther Meijer is Teaching Fellow in Classics at Durham University. She recently obtained her doctoral degree with a dissertation entitled All Roads lead to Home: Navigating Self and Empire in Early Imperial Poetry (2021). Her research focuses on Neronian and Flavian literature, concentrating on the presence of philosophical currents and rhetoric of empire in poetry.