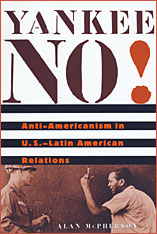 In 1958, angry Venezuelans attacked Vice President Richard Nixon in Caracas, opening a turbulent decade in Latin American-U.S. relations. In Yankee No! Alan McPherson sheds much-needed light on the controversial and pressing problem of anti-U.S. sentiment in the world.

Examining the roots of anti-Americanism in Latin America, McPherson focuses on three major crises: the Cuban Revolution, the 1964 Panama riots, and U.S. intervention in the Dominican Republic. Deftly combining cultural and political analysis, he demonstrates the shifting and complex nature of anti-Americanism in each country and the love-hate ambivalence of most Latin Americans toward the United States. When rising panic over "Yankee hating" led Washington to try to contain foreign hostility, the government displayed a surprisingly coherent and consistent response, maintaining an ideological self-confidence that has outlasted a Latin American diplomacy torn between resentment and admiration of the United States.

However, McPherson warns, U.S. leaders run a great risk if they continue to ignore the deeper causes of anti-Americanism. Written with dramatic flair, Yankee No! is a timely, compelling, and carefully researched contribution to international history.


Reviews of this book:
McPherson examines the years from 1958 to 1966, when anti-Americanism was a prominent theme in inter-American diplomacy, to deliver a helpful reminder that anti-Americanism is not a new phenomenon nor a product only of the Middle East--and that it has been confronted quite effectively in the past, at least when its sources were sought out and taken seriously. He provides several vivid case studies, starting with the attacks on Vice President Richard Nixon in Caracas and continuing on to Cuba, Panama, and the Dominican Republic. Together, these examples show the variability and ambivalence of anti-Americanism; they also emphasize the importance of U.S. policies that respond to its challenges rather than dismissing it as a cynical invention of alienated elites...This well-written and balanced book should be required reading in the White House, in Langley, and around Foggy Bottom.
--Foreign Affairs

Alan McPherson has not only made a valuable contribution to the literature on U.S.-Latin American relations but, more importantly, he has provided a superb analysis of anti-Americanism by identifying its variability, its ambivalence, and the U.S. resilience in confronting the challenge during the critical years framed in this book. In his sophistication and in his writing he demonstrates all the attributes of a seasoned historian.
--Lester D. Langley, author of The Americas in the Modern Age

McPherson expertly extends the field of U.S. foreign relations into social and cultural history. In his analysis of U.S. relations with Cuba, the Dominican Republic, and Panama, he deftly avoids the trap of writing international history solely with the 'view from Washington' perspective. I unequivocally recommend it.
--Stephen Rabe, author of Eisenhower and Latin America

This timely, deeply researched, analytically rigorous, and handsomely written study probes the many anti-Americanisms that have bedeviled U.S. relations with Latin America. Why do they hate us?' is an urgent question today. McPherson impressively demonstrates that it has profound historical roots that can inform caring policymakers eager to prevent global violence.
--Thomas G. Paterson, author of Contesting Castro

McPherson opens a revealing window on the heretofore elusive phenomenon of anti-Americanism. In so doing he takes his place in the front ranks of younger scholars writing about U.S. foreign relations.
--William Walker, Florida International University
[more] 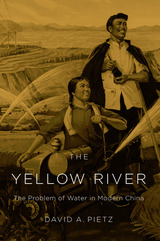 The Yellow River
David A. Pietz
Harvard University Press, 2015
In the Maoist years the North China Plain was re-engineered to use every drop of water for irrigation and hydroelectricity. As David Pietz shows, China’s urban growth, industrial expansion, and agricultural intensification rested on compromised water resources, with effects that cast a long shadow over China’s future course as a global power.
[more] 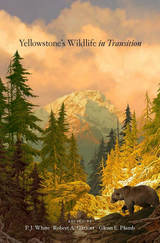 Yellowstone's Wildlife in Transition
P. J. White
Harvard University Press, 2013
The world's first national park is constantly changing. How we understand and respond to recent events putting species under stress will determine the future of ecosystems millions of years in the making. Marshaling expertise from over 30 contributors, Yellowstone's Wildlife in Transition examines three primary challenges to the park's ecology.
[more]

Young Minds in Social Worlds
Katherine Nelson
Harvard University Press, 2007
Katherine Nelson re-centers developmental psychology with a revived emphasis on development and change, rather than foundations and continuity. Nelson argues that a child’s entrance into the community of minds is a gradual process with enormous consequences for child development, and the adults that they become.
[more]

The Young Professional’s Survival Guide
C. K. Gunsalus
Harvard University Press, 2012
A nationally recognized expert on professional ethics uses pungent real-world examples to help people new to the work world recognize ethical situations that can lead to career-damaging mistakes—and prevent them. Gunsalus offers questions to ask yourself, sample scripts to use on others, and guidance in handling disputes fairly and diplomatically.
[more] 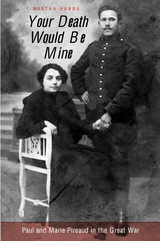 Your Death Would Be Mine
Martha HANNA
Harvard University Press, 2006
Paul and Marie Pireaud, a young peasant couple from southwest France, were newlyweds when World War I erupted. With Paul in the army from 1914 through 1919, they were forced to conduct their marriage mostly by correspondence. Drawing upon the hundreds of letters they wrote, Martha Hanna tells their moving story and reveals a powerful and personal perspective on war. Civilians and combatants alike maintained bonds of emotional commitment and suffered the inevitable miseries of extended absence. While under direct fire at Verdun, Paul wrote with equal intensity and poetic clarity of the brutality of battle and the dietary needs (as he understood them) of his pregnant wife. Marie, in turn, described the difficulties of working the family farm and caring for a sick infant, lamented the deaths of local men, and longed for the safe return of her husband. Through intimate avowals and careful observations, their letters reveal how war transformed their lives, reinforced their love, and permanently altered the character of rural France. Overwhelmed by one of the most tumultuous upheavals of the modern age, Paul and Marie found solace in family and strength in passion. Theirs is a human story of loneliness and longing, fear in the face of death, and the consolations of love. Your Death Would Be Mine is a poignant tale of ordinary people coping with the trauma of war.
[more] 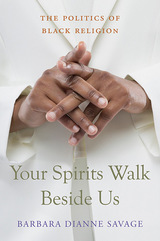 Your Spirits Walk Beside Us
The Politics of Black Religion
Barbara Dianne Savage
Harvard University Press, 2008
Even before the emergence of the civil rights movement, African American religion and progressive politics were assumed to be inextricably intertwined. Savage counters this assumption with the story of a highly diversified religious community whose debates over engagement in the struggle for racial equality were as vigorous as they were persistent.
[more]

You’re Paid What You’re Worth
Jake Rosenfeld
Harvard University Press, 2020
A myth-busting book challenges the idea that we’re paid according to objective criteria and places power and social conflict at the heart of economic analysis.

Your pay depends on your productivity and occupation. If you earn roughly the same as others in your job, with the precise level determined by your performance, then you’re paid market value. And who can question something as objective and impersonal as the market? That, at least, is how many of us tend to think. But according to Jake Rosenfeld, we need to think again.

Job performance and occupational characteristics do play a role in determining pay, but judgments of productivity and value are also highly subjective. What makes a lawyer more valuable than a teacher? How do you measure the output of a police officer, a professor, or a reporter? Why, in the past few decades, did CEOs suddenly become hundreds of times more valuable than their employees? The answers lie not in objective criteria but in battles over interests and ideals. In this contest four dynamics are paramount: power, inertia, mimicry, and demands for equity. Power struggles legitimize pay for particular jobs, and organizational inertia makes that pay seem natural. Mimicry encourages employers to do what peers are doing. And workers are on the lookout for practices that seem unfair. Rosenfeld shows us how these dynamics play out in real-world settings, drawing on cutting-edge economics, original survey data, and a journalistic eye for compelling stories and revealing details.

At a time when unions and bargaining power are declining and inequality is rising, You’re Paid What You’re Worth is a crucial resource for understanding that most basic of social questions: Who gets what and why?
[more]