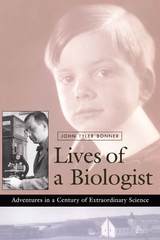 Lives of a Biologist
Adventures in a Century of Extraordinary Science
John Tyler. BONNER
Harvard University Press, 2002
Beginning with the discovery of genes on chromosomes and culminating with the unmasking of the most minute genetic mysteries, the twentieth century saw astounding and unprecedented progress in the science of biology. In an illustrious career that spanned most of the century, biologist John Bonner witnessed many of these advances firsthand. Part autobiography, part history of the extraordinary transformation of biology in his time, Bonner's book is truly a life in science, the story of what it is to be a biologist observing the unfolding of the intricacies of life itself.

Bonner's scientific interests are nearly as varied as the concerns of biology, ranging from animal culture to evolution, from life cycles to the development of slime molds. And the extraordinary cast of characters he introduces is equally diverse, among them Julian Huxley, J. B. S. Haldane, Leon Trotsky, and Evelyn Waugh. Writing with a charm and freshness that bring the most subtle nuances of science to life, he pursues these interests through the hundred years that gave us the discovery of embryonic induction; the interpretation of evolution in terms of changes in gene frequency in a population; growth in understanding of the biochemistry of the cell; the beginning of molecular genetics; remarkable insights into animal behavior; the emergence of sociobiology; and the simplification of ecological and evolutionary principles by means of mathematical models. In this panoramic view, we see both the sweep of world events and scientific progress and the animating details, the personal observations and experiences, of a career conducted in their midst.

In Bonner's view, biology is essentially the study of life cycles. His book, marking the cycles of a life in biology, is a fitting reflection of this study, with its infinite, and infinitesimal, permutations.

Reviews of this book:
A charming memoir combining autobiography and a 20th-century history of biology. "A gentleman and a scholar" aptly describes Bonner...Bonner's own lifecycle makes for pleasant reading and inspires a new respect for slime molds.
--Kirkus Reviews

Reviews of this book:
Bonner has devoted much of his imaginative and creative biological research of the intervening years to cellular slime molds, which lead fascinating and, before Bonner's work, previously largely unexplained lives. His accounts of his and his graduate students' thinking and experiments convey much of the scientific approach to problems lucidly, and those of his travels, his vacations in Nova Scotia over the course of 40 years, and the many amusing and illuminating incidents in his life reflect a refreshing open'mindedness. This is one scientist's autobiography that manages to be simultaneously delightful and strikingly informative.
--William Beatty, Booklist

Reviews of this book:
This charming and unduly modest book is part memoir, part distillation of 20th-century biology, as told by an eminent researcher, writer and teacher who witnessed much of it firsthand. Bonner...invokes life cycles and development, his specialties, to talk about the last century's gigantic steps forward in biology. He covers advances in biochemistry, population genetics and embryology; the discovery of DNA structure; and the human genome project. Against this parade of discoveries, Bonner considers his own career, which included everything from animal social behavior to evolution.
--Publishers Weekly

Reviews of this book:
John Tyler Bonner had the luck to be born into a family that lived a charmed life, the fortune to find a lifelong passion and the timing to live at the heyday of his favorite subject. In his autobiography, The Lives of a Biologist: Adventures in a Century of Extraordinary Science, Bonner...smoothly integrates advances in biology during the 20th century with tales from a life that now stretches into its ninth decade. In simple but elegant prose, he revisits some of the most important biological advances, from embryology to molecular genetics.
--Sally Squires, Washington Post

Reviews of this book:
Here is a man of prodigious scientific talent, who emerges in Lives of a Biologist as the best kind of scientist--a man fascinated by the things he is investigating, and finding great joy in them...This is a life well and fulfillingly lived, told with warmth and humor.
--John R. G. Turner, New York Times Book Review

Reviews of this book:
This memoir by the great celebrant of slime moulds offers a fascinating overview of a century of biology. Bonner tells of changes in biological thinking, and his own pervasive influence in the study of life cycles and morphogenesis.
--New Scientist

Reviews of this book:
[A] gracefully written memoir...Bonner, who began his career as an embryologist, provides many insights regarding the changing fashions he and others have observed in the field of developmental biology.
--K. B. Sterling, Choice

A gracious and immensely enjoyable memoir from an era in which scientists could still be gentlemen. Bonner's generosity of spirit shines through on almost every page.
--Evelyn Fox Keller, MIT

Imagine a wonderful writer who just keeps writing book after book and just keeps getting more and more readable with each one. That's John Bonner. Now he's done a memoir full of magic names from the past, where his kind humor softens a keen eye for human antics including his own. If you like biology, biography, and history of science and don't mind having fun reading it, then this book is for you. I would get two, one to keep and one to loan."
--Mary Jane West-Eberhard Smithsonian Tropical Research Institute

Surely there can be few scientists with the breadth of knowledge, the puckish wit and the all-round modest good humor that John Bonner displays in this splendid memoir. Long may he write!
--Anne Firor Scott, W.K. Boyd Professor of History emerita, Duke University

A charming, personal account of the ascendance of the life sciences to their current dominance by someone who has been there. Few biologists grasp their discipline at as many levels as John Tyler Bonner does, and even fewer can claim as many firsthand encounters with the greats of the past century. The result is an autobiography that is both delightful and informative.
--Frans de Waal, Living Links Center at Emory University

This is a delightful memoir by one of the most charming and well-spoken biologists on the planet. John Tyler Bonner's career now spans half a dozen scientific generations, from each of which he has gathered friends and wisdom. In looking back, he illuminates both the story of his life and the story of life.
--Jonathan Weiner, author of The Beak of the Finch and Time, Love, and Memory
[more] 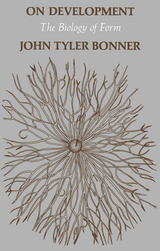