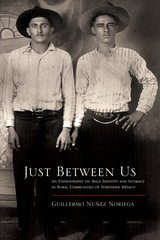 Just Between Us
An Ethnography of Male Identity and Intimacy in Rural Communities of Northern Mexico
Guillermo Núñez Noriega
University of Arizona Press, 2014
A photograph of two men, cowboy-hatted and -booted and discreetly holding hands, is the departure point in a groundbreaking study on masculinity and homosexuality in Mexico. Just Between Us, an ethnography of intimacy and affection between men, explores the concept of masculine identity and homoeroticism, expressing the difficulties men face in maintaining their masculinity while expressing intimacy and affection.

Using fieldwork from rural Sonora, Mexico, Guillermo Núñez Noriega posits that men accept this intimacy outside gender categories and stereotypes, despite the traditional patriarchal society. This work contests homophobia and the heterosexual ideal of men and attempts to break down the barriers between genders.

The photograph Núñez Noriega uses to explore the shifting attitudes and perceptions of sexuality and gender provokes more questions than answers. Recognizing the societal regulations at play, the author demonstrates the existence in contemporary Mexico of an invisible regime of power that constructs and regulates the field of possibilities for men’s social actions, especially acts of friendship, affection, and eroticism with other men. The work investigates “modes of speaking” about being a man, on being gay, on the implicit meanings of the words homosexual, masculine, trade, fairy, and others—words that construct possibilities for intimacy, particularly affective and erotic intimacy among men.

Multiple variants of homoeroticism fall outside the dominant model, Núñez Noriega argues, a finding that offers many lessons on men and masculine identities. This book challenges patriarchal definitions of sex, gender, and identity; it promotes the unlearning of dominant conventions of masculinity to allow new ways of being.
[more]