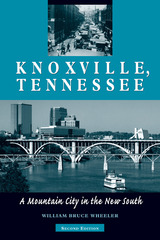 Knoxville, Tennessee
A Mountain City in the New South
William Bruce Wheeler
University of Tennessee Press, 2005
Knoxville, Tennessee: A Mountain City in the New South is much more than an update to the 1983 edition; it is virtually a complete rethinking of its predecessor as well as an updating of Knoxville’s story from the 1982 World’s Fair to the death of the nearly legendary Cas Walker.In this new edition, Wheeler argues that, like Jay Gatsby in The Great Gatsby (1925), Knoxvillians have fabricated for themselves a false history, portraying themselves and their city as the almost impotent victims of historical forces that they could neither alter nor control. The result of this myth, Wheeler says, is a collective mentality of near-helplessness against the powerful forces of isolation, poverty, and even change itself. But Knoxville’s past is far more complicated than that, for the city contained abundant material goods and human talent that could have been used to propel Knoxville into the ranks of the premier cities of the New South—if those assets had not slipped through the fingers of both the leaders and the populace. In all, Knoxville’s history is the story of colliding forces—country and city, North and South, the poor and the elite, as well as the story of colorful figures, including Perez Dickinson, Edward Sanford, George Dempster, William Yardley, Louis Brownlow, Cas Walker, Carlene Malone, Victor Ashe, and many, many more.This is not, however, a history–or a future—without hope. Wheeler charts positive changes as well, such as downtown residential movements, urban renewal initiatives, political progressivism, and improving race relations. In many ways, Knoxville’s story parallels the struggles facing all American cities, making this revised edition of interest both as a regional history and as a fascinating case study of American urbanism.William Bruce Wheeler is professor of history at the University of Tennessee, Knoxville. He is the co-author of TVA and the Tellico Dam: A Bureaucratic Crisis in Post-Industrial America and is currently at work on the sixth edition of Discovering the American Past.
[more] 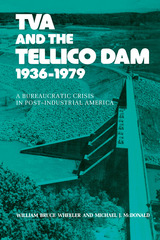