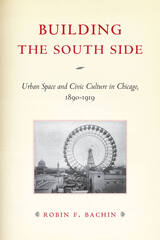 Building the South Side explores the struggle for influence that dominated the planning and development of Chicago's South Side during the Progressive Era. Robin F. Bachin examines the early days of the University of Chicago, Chicago’s public parks, Comiskey Park, and the Black Belt to consider how community leaders looked to the physical design of the city to shape its culture and promote civic interaction.
Bachin highlights how the creation of a local terrain of civic culture was a contested process, with the battle for cultural authority transforming urban politics and blurring the line between private and public space. In the process, universities, parks and playgrounds, and commercial entertainment districts emerged as alternative arenas of civic engagement.
“Bachin incisively charts the development of key urban institutions and landscapes that helped constitute the messy vitality of Chicago’s late nineteenth- and early twentieth-century public realm.”—Daniel Bluestone, Journal of American History
"This is an ambitious book filled with important insights about issues of public space and its use by urban residents. . . . It is thoughtful, very well written, and should be read and appreciated by anyone interested in Chicago or cities generally. It is also a gentle reminder that people are as important as structures and spaces in trying to understand urban development."
—Maureen A. Flanagan, American Historical Review
AUTHOR BIOGRAPHY
Robin F. Bachin is the Charlton W. Tebeau Associate Professor of History at the University of Miami.
TABLE OF CONTENTS


Acknowledgments
Introduction
Part 1 - The University and the City
1. A New Order of Things: Planning and Building the University of Chicago
2. The City Seeking Aid from Alma Mater: Collegiate Culture, Coeducation, and the Boundaries of College and Community
Part 2 - Parks as Public Space
3. To Lay the Foundations for Good Citizenship: Neighborhood Parks and Outdoor Recreation
4. Let Your Watchword Be Order and Your Beacon Beauty: The Burnham Plan and the Civic Lakefront
Part 3 - Commercial Leisure and Civic Culture
5. Baseball Palace of the World: Commercial Recreation and the Building of Comiskey Park
6. A Mecca for Pleasure: Leisure, Work, and Spaces of Race Pride
Conclusion
Notes
Index