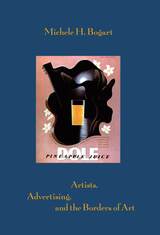 Norman Rockwell and Andy Warhol, J. C. Leyendecker and Georgia O'Keeffe, the Metropolitan Museum of Art and Pepsi-Cola, the avant garde and the Famous Artists Schools, Inc.: these are some of the unexpected pairings encountered in Artists, Advertising, and the Borders of Art. In the first interdisciplinary study of the imagery and practices of commercial artists, Michele H. Bogart explores, in unprecedented detail, the world of commercial art—its illustrators, publishers, art directors, photographers, and painters. She maps out the long, permeable border between art and commerce and expands our picture of artistic culture in the twentieth century.

From the turn of the century through the 1950s, the explosive growth of popular magazines and national advertising offered artists new sources of income and new opportunities for reaching huge audiences. Bogart shows how, at the same time, this change in the marketplace also forced a rethinking of the purpose of the artistic enterprise itself. She examines how illustrators such as Howard Pyle, Charles Dana Gibson, and Norman Rockwell claimed their identities as artists within a market-oriented framework. She looks at billboard production and the growing schism between "art" posters and billboard advertisements; at the new roles of the art director; at the emergence of photography as the dominant advertising medium; and at the success of painters in producing "fine art" for advertising during the 1930s and 1940s.
TABLE OF CONTENTS