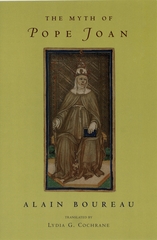 In the ninth century, a brilliant young woman named Joan disguised herself as a man so that she could follow her lover into the then-exclusively male world of scholarship. She proved so successful that she ascended the Catholic hierarchy in Rome and was eventually elected pope. Her pontificate lasted two years, until she became pregnant and died after giving birth during a public procession from the Vatican.

Or so the legend goes—a legend that was fabricated sometime in the thirteenth century, according to Alain Boureau, and which has persisted in one form or another down to the present day. In this fascinating saga of belief and rhetoric, politics and religion, Boureau investigates the historical and ecclesiastical circumstances under which the myth of Pope Joan was constructed and the different uses to which it was put over the centuries. He shows, for instance, how Catholic clerics justified the exclusion of women from the papacy and the priesthood by employing the myth in misogynist moral tales, only to find the popess they had created turned against them in anti-Catholic propaganda during the Reformation.
AUTHOR BIOGRAPHY
Alain Boureau is director of studies at the Ecole des Hautes Etudes en Sciences Sociales, and a director at the Centre de Recherches Historiques, Paris. He is the author of nine books, including The Lord's First Night: The Myth of the Droit de Cuissage, also published by the University of Chicago Press.
TABLE OF CONTENTS

Contents
Part I The Sex of the Popes: A Roman Story
1 The Pontificals
2 The History of a Chair
3 The Popes between Two Stools