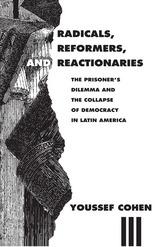 Latin American democracies of the sixties and seventies, most theories hold, collapsed because they had become incompatible with the structural requirements of capitalist development. In this groundbreaking application of game theory to political phenomena, Youssef Cohen argues that structural conditions in Latin American countries did not necessarily preclude the implementation of social and economic reforms within a democratic framework.

Focusing on the experiences of Chile and Brazil, Cohen argues that what thwarted democratic reforms in Latin America was a classic case of prisoner's dilemma. Moderates on the left and the right knew the benefits of coming to a mutual agreement on socio-economic reforms. Yet each feared that, if it cooperated, the other side could gain by colluding with the radicals. Unwilling to take this risk, moderate groups in both countries splintered and joined the extremists. The resulting disorder opened the way for military control.

Cohen further argues that, in general, structural explanations of political phenomena are inherently flawed; they incorrectly assume that beliefs, preferences, and actions are caused by social, political, and economic structures. One cannot explain political outcomes, Cohen argues, without treating beliefs and preferences as partly independent from structures, and as having a causal force in their own right.
TABLE OF CONTENTS