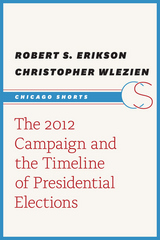 BUY FROM
The 2012 Campaign and the Timeline of Presidential Elections
by Robert S. Erikson and Christopher Wlezien
University of Chicago Press, 2014
eISBN: 978-0-226-18417-3
Do voters cast ballots for the candidates whose positions best match their own? Or does the race for president come down to who runs the most effective campaign? In their book, The Timeline of Presidential Elections, published in 2012, Erikson and Wlezien documented how both factors come into play. Having amassed data from national polls covering presidential elections from 1952 to 2008, they could track how outcomes take shape over the course of an election year. But they wanted to know whether Barak Obama’s historic 2012 campaign would follow the same pattern.

This e-book both presents the central arguments from Timeline and updates the statistical analysis to include data from 2012.  The authors also use the 2012 presidential campaign as a test of the empirical patterns they found in the previous fifteen elections.  They show that Obama’s campaign conforms to their projections, and they confirm that it is through campaigns that voters are made aware of--or not made aware of--fundamental factors like candidates’ policy positions that determine which ticket will get their votes. In other words, fundamentals matter, but only because of campaigns. The 2012 Campaign and the Timeline of Presidential Elections will be useful in courses on the election process.
AUTHOR BIOGRAPHY
Robert S. Erikson is professor of political science at Columbia University and the author or coauthor of several books, including The Macro Polity.Christopher Wlezien is professor of political science at Temple University and coauthor of Degrees of Democracy, among other books.
REQUEST ACCESSIBLE FILE