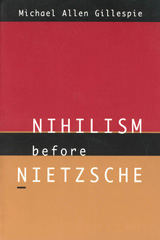 In the twentieth century, we often think of Nietzsche, nihilism, and the death of God as inextricably connected. But, in this pathbreaking work, Michael Gillespie argues that Nietzsche, in fact, misunderstood nihilism, and that his misunderstanding has misled nearly all succeeding thought about the subject.

Reconstructing nihilism's intellectual and spiritual origins before it was given its determinitive definition by Nietzsche, Gillespie focuses on the crucial turning points in the development of nihilism, from Ockham and the nominalist revolution to Descartes, Fichte, the German Romantics, the Russian nihilists and Nietzsche himself. His analysis shows that nihilism is not the result of the death of God, as Nietzsche believed; but the consequence of a new idea of God as a God of will who overturns all eternal standards of truth and justice. To understand nihilism, one has to understand how this notion of God came to inform a new notion of man and nature, one that puts will in place of reason, and freedom in place of necessity and order.
TABLE OF CONTENTS


Preface
Introduction
1: Descartes and the Deceiver God
2: Descartes and the Origin of the Absolute I
3: Fichte and the Dark Night of the Noumenal I
4: The Dawn of the Demonic: Romanticism and Nihilism
5: The Demons Unbound: Russian Nihilism and the Pursuit of the Promethean
6: From the Demonic to the Dionysian
7: Dionysus and the Triumph of Nihilism
Epilogue
List of Abbreviations
Notes
Index