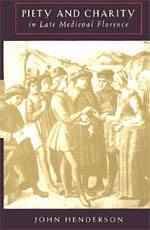 Piety and Charity in Late Medieval Florence
by John Henderson
University of Chicago Press, 1997
Paper: 978-0-226-32688-7
John Henderson examines the relationship between religion and society in late medieval Florence through the vehicle of the religious confraternity, one of the most ubiquitous and popular forms of lay association throughout Europe. This book provides a fascinating account of the development of confraternities in relation to other communal and ecclesiastical institutions in Florence. It is one of the most detailed analyses of charity in late medieval Europe.

"[A] long-awaited book. . . . [It is] the most complete survey of confraternities and charity, not only for Florence, but for any Italian city state to date. . . . This book recovers more vividly than other recent works what it meant to be a member of a confraternity in the late middle ages."—Samuel K. Cohn, Jr., Economic History Review


List of Plates
List of Figures
List of Tables
List of Abbreviations
Introduction
1: Fraternity and Fraternities in Medieval Italy
2: The Confraternities of Late Medieval Florence: An Overview
3: The Laudesi Companies
4: Penitence and Penitents
5: Death, Funerals, and Bequests
6: Piety and Charity: Orsanmichele and a Public Cult
7: Charity and the Poor before the Black Death
8: Charity, the Poor, and the Aftermath of the Black Death, 1348-1400
9: Charity in Fifteenth-Century Florence
10: The Secular and the Sacred
Appendix: Confraternities Meeting in Florence, 1240-1499
Bibliography
Index