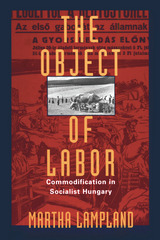 Did socialist policies leave the economies of Eastern Europe unprepared for current privatization efforts? Under communist rule, were rural villages truly left untouched by capitalism? In this historical ethnography of rural Hungary, Martha Lampland argues not only that the transition to capitalism was well under way by the 1930s, but that socialist policies themselves played a crucial role in the development of capitalism by transforming conceptions of time, money, and labor.

Exploring the effects of social change thrust upon communities against their will, Lampland examines the history of agrarian labor in Hungary from World War I to the early 1980s. She shows that rural workers had long been subject to strict state policies similar to those imposed by collectivization. Since the values of privatization and individualism associated with capitalism characterized rural Hungarian life both prior to and throughout the socialist period, capitalist ideologies of work and morality survived unscathed in the private economic practices of rural society. Lampland also shows how labor practices under socialism prepared the workforce for capitalism. By drawing villagers into factories and collective farms, for example, the socialist state forced farmers to work within tightly controlled time limits and to calculate their efforts in monetary terms. Indeed, this control and commodification of rural labor under socialism was essential to the transformation to capitalism.
TABLE OF CONTENTS