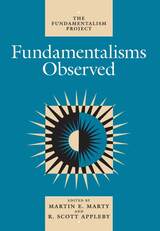 This volume is an encyclopedic introduction to movements of religious reaction in the twentieth century. The fourteen chapters are thematically linked by a common set of concerns: the social, political, cultural, and religious contexts in which these movements were born; the particular world-views, systems of thought, and beliefs that govern each movement; the ways in which leaders and group members make sense of and respond to the challenges of the modern, postcolonial era in world history.

The contributors include sociologists, cultural anthropologists, and historians, some of whom have been participant-observers in the groups under consideration. As an analysis of the global resurgence of religion, Fundamentalisms Observed sheds new light on current religious movements and cultures from North America to the Far East.
TABLE OF CONTENTS