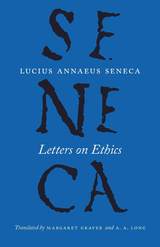 The Roman statesman and philosopher Seneca (4 BCE–65 CE) recorded his moral philosophy and reflections on life as a highly original kind of correspondence. Letters on Ethics includes vivid descriptions of town and country life in Nero’s Italy, discussions of poetry and oratory, and philosophical training for Seneca’s friend Lucilius. This volume, the first complete English translation in nearly a century, makes the Letters more accessible than ever before.

Written as much for a general audience as for Lucilius, these engaging letters offer advice on how to deal with everything from nosy neighbors to sickness, pain, and death. Seneca uses the informal format of the letter to present the central ideas of Stoicism, for centuries the most influential philosophical system in the Mediterranean world. His lively and at times humorous expositions have made the Letters his most popular work and an enduring classic. Including an introduction and explanatory notes by Margaret Graver and A. A. Long, this authoritative edition will captivate a new generation of readers.
AUTHOR BIOGRAPHY
Margaret Graver is the Aaron Lawrence Professor of Classics at Dartmouth College. She is the author of Cicero on the Emotions: Tusculan Disputations 3 and 4 and Stoicism and Emotion. A. A. Long is Chancellor’s Professor Emeritus of Classics at the University of California, Berkeley. He is the author of many books on ancient philosophy, including Epictetus: A Stoic and Socratic Guide to Life and Greek Models of Mind and Self.
REVIEWS
“Translators Margaret Graver and A.A. Long should be commended for reintroducing the Letters to a new generation. . . . A Seneca as approachable and fresh as he was thousands of years ago.”
— American Conservative

“[An] excellent book. . . . The Stoic ideas are as relevant now as they were in the days of the emperor Nero and [Graver and Long] have done Seneca (and us) a great service in making the old man speak so clearly once again.”
— Classics for All Reviews

“Excellent. . . . This is an exceptionally accessible text. . . that will be invaluable not only to those interested in the letters as literary artifacts that open an important window onto imperial Rome’s cultural life, but also to readers engaging with the letters philosophically, as the lively and urgent writings of one of classical antiquity’s most important ethicists. . . . Essential.”
— Choice

"Graver and Long successfully manage to draw the reader in. . . . An accurate, readable and well-annotated translation of Seneca's letters."
— Bryn Mawr Classical Review