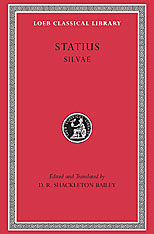 Statius was raised in the Greek cultural milieu of the Bay of Naples, and his Greek literary education lends a sophisticated veneer to his ornamental verse. The role of the emperor and the imperial circle in determining taste is another readily apparent influence: the figure of the emperor Domitian permeates these poems. D. R. Shackleton Bailey's new edition of the Silvae, a freshly edited Latin text facing a graceful translation, replaces the earlier Loeb Classical Library edition with translation by J. H. Mozley.