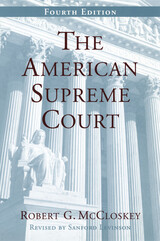 First published more than forty years ago, Robert G. McCloskey's classic work on the Supreme Court's role in constructing the U.S. Constitution has introduced generations of students to the workings of our nation's highest court. In this fourth edition, Sanford Levinson extends McCloskey's magisterial treatment to address the Court's most recent decisions, including its controversial ruling in Bush v. Gore and its expansion of sexual privacy in Lawrence v. Texas. The book's chronology of important Supreme Court decisions and itsannotated bibliographical essay have also been updated.

As in previous editions, McCloskey's original text remains unchanged. He argues that the Court's strength has always been its sensitivity to the changing political scene, as well as its reluctance to stray too far from the main currents of public sentiment. Levinson's two new chapters show how McCloskey's approach continues to illuminate recent developments, such as the Court's seeming return to its pre-1937 role as "umpire" of the federal system. It is in Bush v. Gore, however, where the implications of McCloskey's interpretation stand out most clearly.

The best and most concise account of the Supreme Court and its place in American politics, McCloskey's wonderfully readable book is an essential guide to its past, present, and future prospects of this institution.
AUTHOR BIOGRAPHY
Robert G. McCloskey was professor of government at Harvard University. He is the author of American Conservatism in the Age of the Enterprise. Sanford Levinson is the W. St. John Garwood and W. St. John Garwood Jr. Regents Chair in Law at the University of Texas Law School, the author of Constitutional Faith, and coeditor of Processes of Constitutional Decisionmaking.
TABLE OF CONTENTS


Editor's Foreword to the Second Edition
Editor's Foreword to the First Edition
Preface to the Second Edition
Acknowledgments
Preface to the First Edition
1. The Genesis and Nature of Judicial Power
2. The Establishment of the Right to Decide: 1789-1810
3. The Marshall Court and the Shaping of the Nation: 1810-1835
4. The Court under Taney: The Natural History of Judicial Prestige
5. Constitutional Evolution in the Gilded Age: 1865-1900
6. The Judiciary and the Regulatory State: 1900-1937
7. The Modern Court and Postwar America: 1937-1959
8. Civil Liberties, Civil Rights, and the Supreme Court
9. Judicial Monitoring of the New American Welfare State
Epilogue: The Court of Today and the Lessons of History
Coda
Important Dates
Bibliographic Essay
Index