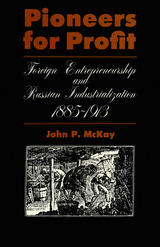 Foreign investment increased from 17 percent of the capital of industrial corporations in Imperial Russia in 1880 to 47 percent in 1914, coinciding with the rapid development of Russian industrialization before World War I. John McKay's study, based largely on intensive research in numerous archives and utilizing many previously unexplored private business records, is the first detailed analysis of the impact of foreign enterprise on Russian industry during this period. His conclusions are significant for historians, economists, and those interested in the development of modern industrial society.
TABLE OF CONTENTS