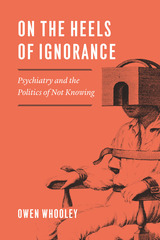 Psychiatry has always aimed to peer deep into the human mind, daring to cast light on its darkest corners and untangle its thorniest knots, often invoking the latest medical science in doing so. But, as Owen Whooley’s sweeping new book tells us, the history of American psychiatry is really a record of ignorance. On the Heels of Ignorance begins with psychiatry’s formal inception in the 1840s and moves through two centuries of constant struggle simply to define and redefine mental illness, to say nothing of the best way to treat it. Whooley’s book is no antipsychiatric screed, however; instead, he reveals a field that has muddled through periodic reinventions and conflicting agendas of curiosity, compassion, and professional striving. On the Heels of Ignorance draws from intellectual history and the sociology of professions to portray an ongoing human effort to make sense of complex mental phenomena using an imperfect set of tools, with sometimes tragic results.
AUTHOR BIOGRAPHY
Owen Whooley is associate professor of sociology at the University of New Mexico and the author of Knowledge in the Time of Cholera, also published by the University of Chicago Press.
REVIEWS
“On the Heels of Ignorance is a substantial achievement, addressing a core puzzle in the history of psychiatry. Whooley’s gambit is to narrate psychiatry from the point of view of its professional persistence in the face of recurrent failure. Whooley is an engaging writer and his book is an exciting one, with compelling analysis well positioned to make a real impact.”
— Aaron Panofsky, author of Misbehaving Science

“Essential reading for anyone interested in psychiatry’s past fortunes and future prospects. Whooley gives us an arresting interpretation of American psychiatry’s history, challenges, and resiliency, from its origins in the nineteenth-century asylum to its recent embrace of neuroscience. In boldly conceived episodes, Whooley deftly shows how psychiatrists repeatedly and optimistically reinvented their discipline when faced with professional crises.”
— Elizabeth Lunbeck, author of The Americanization of Narcissism

“Whooley convincingly shows that the study of ignorance can produce understanding. Seeing the history of psychiatry through its efforts to manage ignorance is at once new and entirely convincing. The controversies of twenty-first-century psychiatry look very much like those of the nineteenth century, once you are prepared to see the connections and appreciate much of the unknowability of mental suffering. Whooley’s path is one worth taking.”
— Jason Schnittker, University of Pennsylvania

“Over the past five decades, social scientists have examined the history and development of psychiatry largely as a series of triumphs or reforms or as a form of social control. In this provocative and well-researched book, Whooley provides a sharp challenge and turns these perspectives on their head by reinterpreting the development of psychiatry as fundamentally ‘the collective management of ignorance.’”
— Peter Conrad, Brandeis University

“An insightful, thought-provoking book that raises interesting questions on the development of the profession.”
— Journal of the History of Medicine and Allied Sciences

“On the Heels of Ignorance is an innovative, carefully argued and marvelously executed work. It is not a screed against psychiatry. . . . This is a thought‐provoking work that merits a wide readership and inclusion on sociology and history syllabi.”
— Journal of the History of the Behavioral Sciences

“On the Heels of Ignorance offers historians and students of American psychiatry a new and constructive heuristic.”
— Bulletin of the History of Medicine

“Whooley proffers a rather different account of why we allow psychiatry to persist. . . . He traverses the period from psychiatry’s birth in the age of the asylum down to its modern incarnation, which sees psychiatry resting its claims to authority on a dubious diagnostic system and the promise that genetics and neuroscience will soon unlock the mysteries of madness.”
— Times Literary Supplement

Chapter 1: The General Superintendence of All Their Departments
Chapter 2: Unruly Ignorance and Pragmatic Eclecticism
Chapter 3: Ignorance Repressed
Chapter 4: It Takes a Community to Raise a Profession
Chapter 5: Profession of the Book