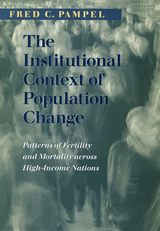 Despite having similar economies and political systems, high-income nations show persistent diversity. In this pioneering work, Fred C. Pampel looks at fertility, suicide, and homicide rates in eighteen high-income nations to show how they are affected by institutional structures. European nations, for example, offer universal public benefits for men and women who are unable to work and have policies to ease the burdens of working mothers. The United States, in contrast, does not. This study demonstrates how public policy differences such as these affect childbearing among working women, moderate pressures for suicide and homicide among the young and old, and shape sex difference in suicide and homicide.

The Institutional Context of Population Change cuts across numerous political and sociological topics, including political sociology, stratification, sex and gender, and aging. It persuasively shows the importance of public policies for understanding the demographic consequences of population change and the importance of demographic change for understanding the consequences of public policies.
AUTHOR BIOGRAPHY
Fred C. Pampel is a research associate in the Population Program of the Institute of Behavioral Science and professor of sociology at the University of Colorado at Boulder. He is the author of Social Change and the Aged and coauthor of Old Age Security in Comparative Perspective and Age, Class, Politics, and the Welfare State.
TABLE OF CONTENTS